I was listening to Offside’s podcast the other week. Johan Orrenius and Anders Bengtsson discuss (in Swedish) everything and nothing about football, media, journalism, and sports writing. In this particular episode they started to talk about former Aston Villa, Watford and England man Graham Taylor and the classic documentary An Impossible Job, which is also known as Do I Not Like That. 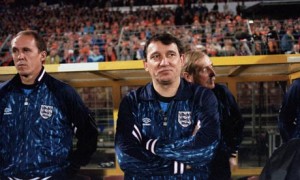 In the documentary, the England team was followed through the qualification stage for the 1994 World Cup. England failed to qualify and in a big part of the documentary the manager Graham Taylor is portrayed from behind the touchline.

I’m not sure if the documentary is a magnificent piece of work, but it is remarkable that the film-makers could come so extremely close to the England team and Graham Taylor, and it is definitively worth to watch.

The documentary has been hailed as a comic masterpiece and people have used it to make fun of Graham Taylor and they have some right to do so. His comments during the game is amusing and he gave plenty of oneliners. And, perhaps most astonishing, the classic press conference where Taylor completely ran over Rob Shepherd is hilarious (and a bit sad). Watch 62-66 minutes in the full documentary below or hear Shepherd discussing it here. But I do think that it is a bit unfair to make too much fun of Taylor. Despite some ridiculous comments now and then I also think that Graham Taylor shows a lovely and loving side.

(And by the way, the ref was absolutely disgraceful in the Holland game. Ronald Koeman should of course have been sent off. That is so very obvious. Moreover, parts of the Holland wall was only a few metres from the following freekick and when the English wall did the same, they got booked.)