Are Beitar Jerusalem fans involved in the murder of 16-years old Palestinian boy Mohammed Abu Khdeir? Well, six men are arrested and Israeli media have been speculating that the arrested men were already well known to the police and linked to hooligans who support Beitar Jerusalem Football Club. 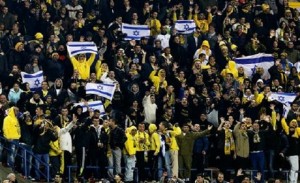 James M. Dorsey, a senior fellow at Nanyang Technological University’s S. Rajaratnam School of International Studies in Singapore and the author of the blog, The Turbulent World of Middle East Soccer writes in various media (e.g. here) that

An Israeli investigation into the brutal murder of 16-year old Mohammed Abu Khdeir in apparent revenge for the killing of three teenage residents of an Israeli settlement on the West Bank has focused attention on Israel’s most militant, racist soccer fan group.

The focus, irrespective of whether the fan group was involved in Mr. Abu Khdeir’s death, is likely to end a long-standing refusal by the Israeli government and football association to crack down on rabidly anti-Palestinian, anti-Muslim soccer club Beitar Jerusalem FC and its notorious La Familia fan group. The club has long enjoyed the support of Israeli leaders, including Prime Minister Benyamin Netanyahu and other prominent right-wing personalities.

I know nothing about who killed the Palestinian teenager, but I do know that Beitar Jerusalem’s supporter group La Familia is openly racist and anti-muslim. A short documentary from ESPN (late 2012) about Beitar Jerusalem and La Familia reveals some horrific information. It is a must see!