In July 1990 Chelsea FC prepared for the new season with a summer camp in Falkenberg, Sweden. I was ten years of age at the time and my father was some kind of organiser during their stay here. My family stayed close to the team and players like Kerry Dixon, Andy Townsend, Graeme Le Saux, and Dennis Wise, who had joined the team from Wimbledon for a club record fee of £1.6 million.

Kerry Dixon was the prolific goal scorer at the club and for me and my younger brother – who actually turned 9 the exact same day as Dixon turned 29, which (if I remember things correctly) was celebrated by the team with a cake for both of them – Dixon was a true hero. Even though I tried to acclaim his striking partner Gordon Durie simply since I got his Gatorade water bottle after a practise (my brother got Dixon’s of course)…

Kerry Dixon was born in Luton in 1961 and was an apprentice at Tottenham Hotspur. After short spells with Chesham United and Dunstable he joined Reading in 1980 and scored 51 league goals in 116 appearances in the third division. Before the 1983-84 season Chelsea’s chairman Ken Bates was willing to pay £150,000 for him but Reading wanted another 25,000 if he ever got two England caps during his stay at Chelsea. Bates needed a night deliberating, but finally decided to meet Reading’s requirements. He was desperate to improve the Chelsea squad after they almost relegated to the third division in the previous season. 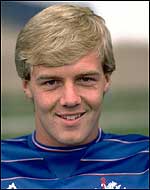 That extra £25,000 was well spent. Kerry Dixon’s pace, heading ability, and two good feet made an instant impact and got him two goals in his debut in a 5-0 victory against Derby County. After assistance from hard working strike partner David Speedie and quality crosses from Pat Nevin, Dixon ended with 34 goals in his first season at Stamford Bridge. Chelsea turned things around and were promoted to Division One one year after risking being relegated to Division 3. And equally important, Chelsea had finally found a worthy replacement for Peter Osgood, the 60’s and 70’s icon in number nine.

Kerry Dixon stayed with the Blues for a decade and after some ups and downs, both for Dixon and Chelsea, he moved to Southampton 1992 after getting 193 goals in 440 appearances. That made him Chelsea’s second-highest goalscorer of all time (now moved down to third after Frank Lampard has taken the first spot with 211 goals).

After a bad season with the Saints he moved to his home town club Luton Town FC and actually entered a game together with Chelsea one last time. In a 1994 Wembley FA Cup semi-final Luton faced Chelsea and the Chelsea fans got a final chance to acknowledge a true club legend. At the end of the game “There’s only one Kerry Dixon” was shouted all over Wembley.

After his playing career Kerry Dixon has tried managing and has been involved in Chelsea TV, but sadly risks getting the sack after being arrested on suspicion of dealing cocaine.

I plan to regularly write about my former heroes. For the blog posts so far, see here. Kerry Dixon is the first player I have written about.