Olof Mellberg announced his retirement from football the other day. The former Aston Villa and Swedish international captain is – for me and most others – the best central defender Sweden has had since Patrik Andersson retired. 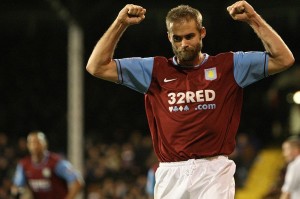 Olof Mellberg is a true professional. His will to win is widely known, and the Swedish media following the national team have reported numerously about a furious Mellberg after losing in football tennis. He read the game well, was reasonably fast, was good in the air, and always performed on a high level.

My memories from Mellberg’s career are many. I remember the growth of his beard (I have seen him doing interviews cleanly shaved one day and with a decent beard the next), how he walked away like nothing had happened from pitch riots in Olympiakos, his goals against England in Euro 2012, his fury against referees, his partnership with Martin Laursen in Aston Villa, signing for Italian giants Juventus, being part in the marvellous World Cup 2006 game against Paraguay in Berlin (I was there), and that he was only decent as a right back but world class in the centre of the defence. Birmingham Mail has listed five reasons why Aston Villa fans will always love Olof Mellberg.

Then, there is of course the fight (which I don’t think was much to report about, but Swedish media certainly did) with Fredrik ’Freddie’ Ljungberg.

Olof Mellberg started his career in his home town club Gullspång, but was soon pick up by Degerfors, the big club in the region. He then moved to AIK and after only ten months, including a Swedish championship, he was sold to Racing Santander in 1998.

Mellberg did well in Spain and rumours that bigger clubs followed him started. In 2001 he joined Aston Villa, where he almost became a cult hero. After 232 league games and 8 goals, including the first ever goal at Emirates Stadium, he decided to move to Juventus in 2008. He got 27 games in Italy, but decided to move on to Olympiakos after only one season. He played in Greece for three seasons and then ended his career by helping Villarreal reach promotion to La Liga and finally moving to Danish giants FC Copenhagen for his last season in his career.

So what will Mellberg do now? It seems like he will not be involved in football for some time. Perhaps he starts studying at the University?

I plan to regularly write about my former heroes. For the blog posts so far, see here. Olof Mellberg is the second player I have written about.